The Story Behind “Here We Listen”

Four months into the Art We There Yet journey, we found ourselves in Gadsden, Alabama. It was an unplanned addition to our route. And what led us there is an interesting story in and of itself.

When we arrived in town, we found a place to park at a boat ramp along the Coosa River. An old train track stretched across the river, peaking both our creative interests. José Luis grabbed the camera to capture some experimental film footage, and I had an off-the-cuff idea to record and film a cajon track beneath the bridge.

“I don’t know yet,” I replied., “Let’s just record it, and I’ll figure it out later. All I know is that I want it to sound like a heartbeat.”

You see, we still hadn’t really gotten our feet underneath us yet. Just four months prior, we had started the journey in a hurried rush, scrambling to get the show on the road as fast as we could.

The bus conversion took 9 months longer than we thought it would, and even though the bus wasn’t completely finished, we felt a mounting pressure to hit the road. We had hoped to have all our ducks in a row before pressing “Go” on this monumental life experience. But honestly…who ever does?

So in August 2019, we threw up our hands and said “The heck with it!” and just started driving. And that first four months was nonstop. Murals, friends, workshops, breakdowns, so many firsts! We barrelled so headlong through the first four months, we didn’t have time to wrap our heads around our creative projects.

Of course we had broad brushstrokes in mind. Filmwork, photography, collaborative recordings, workshops, murals. But there’s this crucial moment of calm an artist needs before digging into an immense project – the point where they sit, center their mind around the inspiration, and build a mental map of how to explore and execute the work.

Yeah, we hadn’t done any of that yet!

So up till that point, I had a hodge-podge collection of recordings, but no clear mental infrastructure for the musical series I wanted to produce.

So there we were in Gadsden. And all I knew was that I wanted a cajon track that sounded like a heartbeat. Filmed under the cool looking bridge.

After Gadsden, we made a swing through Birmingham. By a stroke of good luck, we found a parking spot at a brewery right across from the old Sloss steel-making furnace. Once again, a visually striking location inspired us both to create something. José Luis went to town with his photography, and all I had was,

“Hey babe, film me recording these claps. And…ooh…look at this cool old drum! It has a nice ring to it…Let’s record a couple whacks on this as well!”

You may think my storytelling is for effect. But this is actually how it happened.

In that space of time, so much happened. We produced an experimental film in New Orleans, spent two weeks at the US-Mexico border, COVID hit and turned the world upside down, we hid away in Texas and then hid away some more in Colorado, a tire blew out in Wyoming, we spent the fall painting murals in Idaho, and come October…we were driving across the Bonneville Salt Flats.

A wise lesson has slowly revealed its face throughout the project so far. It’s that life will always hastle us in some way or another. Never will we ever have all our duckies lined up neatly in a row. It’s when you can learn to create amidst the tornado…therein lies a valuable skill.

So there in the Bonneville Salt Flats, a teensy bit of that skill started to creep in. Once again we found ourselves in an amazing setting, and I thought,

“Well something should be filmed here for that song. How about….these hums!”

Fast forward two more months and we were in the fascinating village of Bombay Beach, tucked up against California’s Salton Sea. If you’ve ever seen “Into The Wild”, you know the flavor of this area. Slab City is just down the road, a mecca of nomads and counter-culture artists. Blend that theme with the flaire of Burning Man…and welcome to Bombay Beach. The majority of the nearly-abanded village has been completely transformed into art installations. It is even the final resting place for a few Burning Man pieces.

It was here that things began coming together.

I synced the heartbeat cajon, furnace claps, and salt flat hums into a rudimentary loop. Then we filmed an accompanying bass track in an abandoned-house-turned-art-installation.

“But what song IS this?” he asked again.

“Still don’t know, but we’re just going to keep building it,” was the oh-so-professional reply.

One day I was sitting in the studio with the bass track and the cajon-claps-hum loop, thinking,

“It’s time. This needs to be turned into a song.”

For a hot minute, I tried writing something brand new, but then decided to see if I already had something written that would fit.

See, I have hundreds of written, unreleased songs. Just sitting there on my hard drive, all in various stages of development. I’ve shared about a quarter of them with our patreon family, but still so many remain under wraps.

The main guts of “Here We Listen” were written….phew…way back in….man, I don’t even know. 2009 maybe? It’s always been a song that I couldn’t wait to give a full form one day.

I sat there in the studio with the loop playing, trying different old song ideas, when I came to “Here We Listen”. And wow! It just fit. Lucky for us, José Luis captured the moment:

And from there it took off. The vision was clear. The form was in place.

And all that remained was to record the rest of the instruments: piano, acoustic guitar, electric guitar, and vocals. And Baja…dear, sweet Baja provided the most amazing series of filming locations.

A mountainside overlooking the Sea of Cortez:

And finally, an abandoned lime plant in El Pescadero, the same town where we painted a community mural and gave a songwriting workshop.

Filming the vocals for “Here We Listen” was the best day. We had just met our now-dear friend, Bea, and she was more than game to join in the filming fun, along with our good friend, Joel. So we all loaded up in Bea’s van together, and headed out to film the final piece of the “Here We Listen” puzzle. Bea even produced a wonderful behind-the-scenes video about the day.

And with that, not only did “Here We Listen” come together…but also the vision for my artistic part of the Art We There Yet project.

Sure I do the graphic design and writing side of things, and that’s artistic. But it’s not my focus, it’s not my life’s work.

Music is. And now I have a stronger vision of how we can sustainably create this work inspired by the Americas.

The AWTY Patreon is home to a whole series of intimate, behind-the-scenes stories! 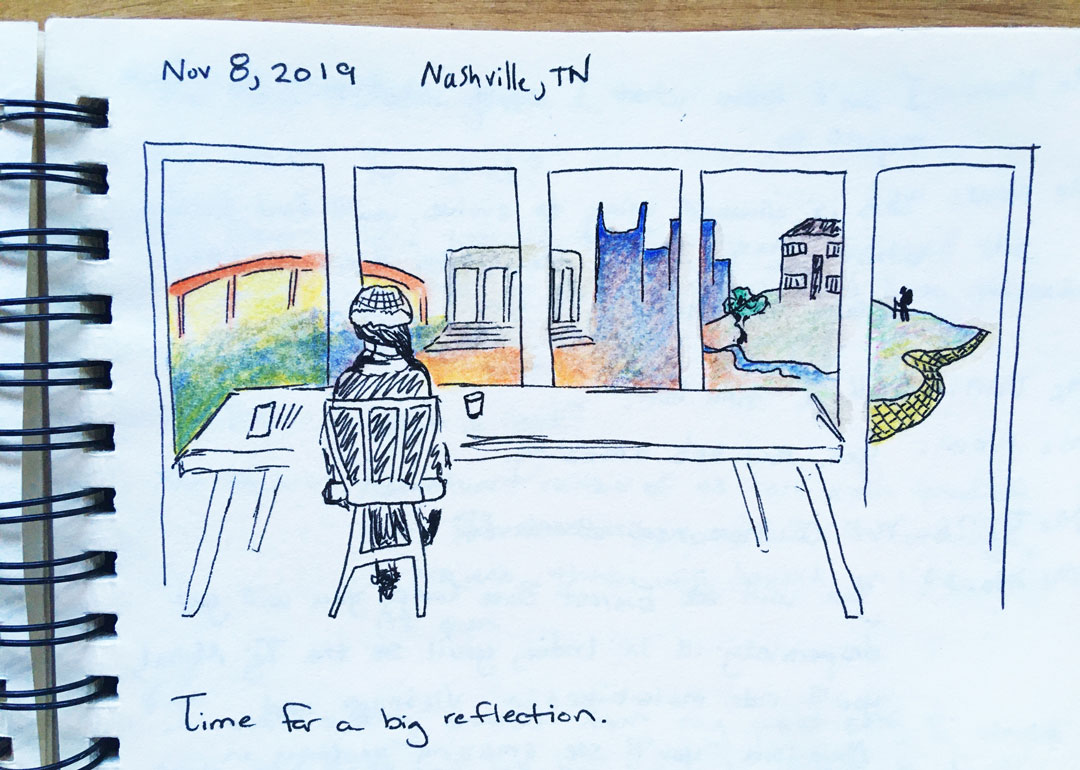 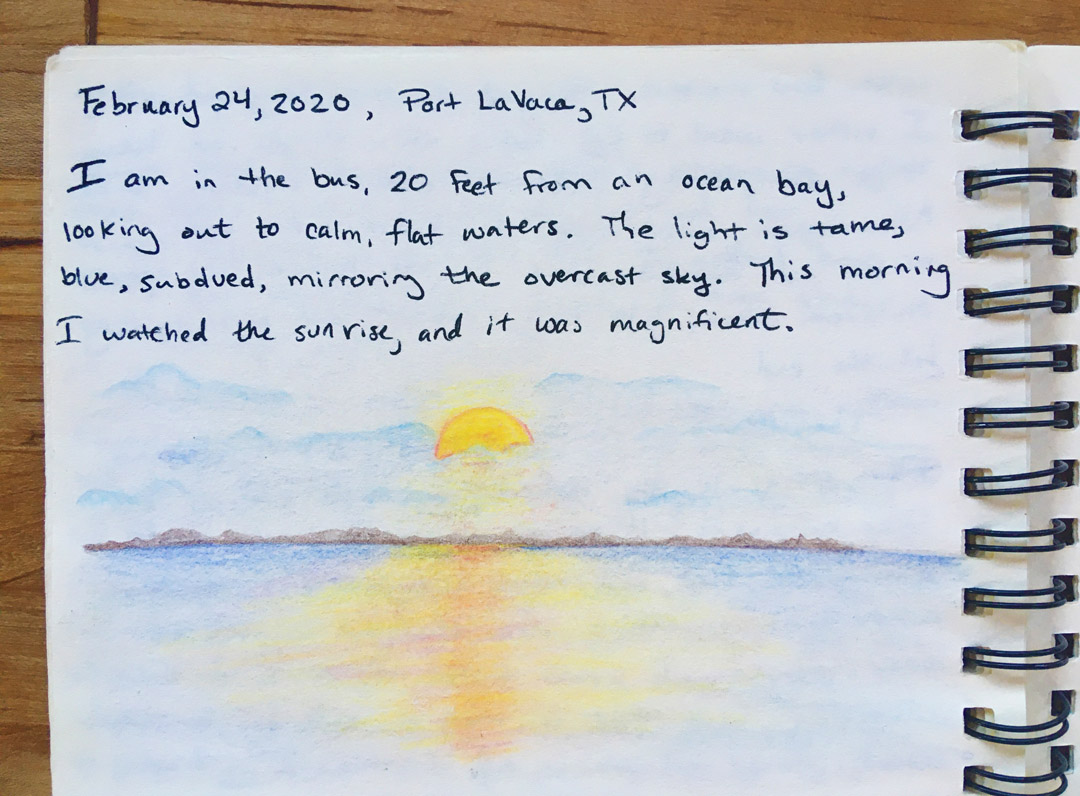 The AWTY Patreon Family is the beating heart behind the Art We There Yet project.

…And they get a mountain of goodies in return!

The Story Behind “I Am The River”

The Story Behind “Chan Chan”

The Story Behind “Wanderer”

A Song from the Bonneville Salt Flats

A Song from the US-Mexico Border

A Song from Guntersville

A Song from Arnold

A Song from Cora & Jess

A Song from Cora & Dave

A Song from Four Friends